In the past every cook would have a spice box – an essential piece of kitchen equipment. Lesley owns the one shown below – a typical 19th century box that did have a lock on it in the past. 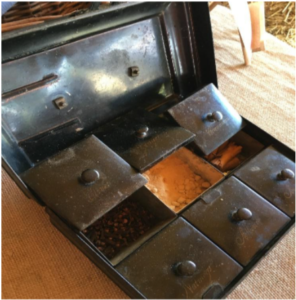 As an ex-cheesemonger, Lesley loves the combination of sweet and spicy with cheese.

When she was working on the recipe for our Spicy Sussex Alberts she wanted to use two old fashioned spices in the biscuits – hot Cayenne pepper, which was very popular with cooks in the 19th century, and sweet Allspice, which was a mainstay of all spice canisters of the time.

This sounds quite a simple task, but it was not the case…

Lesley did not set out to create a biscuit with two distinct elements to it – there must be a physiological/chemical explanation for this, probably connected with how the tongue reads flavours, so if any of our readers can come up with the answer, we would love to hear from you!

So, for all our Spicy Sussex lovers we enclose a voucher code this month for you to use when ordering 4 x Spicy Sussex Alberts in our online shop. With each order of 4 Spicy Sussex we will pop in an extra free box of Sussex Gingerbread Thins, as ginger was another important spice in 19th century spice tins. This voucher can be used up until 5th August 2021.

With over 40 years of experience, this family-owned and run business aims to provide the very best produce from in and around the county of Sussex and the UK. Supplying a wide range of fundamental fruits and vegetables to the good people of Brighton, Hove and its surrounding towns and villages.

As well as supporting over 25 local businesses, they also grow a modest amount of broad beans, courgettes, marrows, squashes & pumpkins.

They have an online shop and also a fruit and veg box delivery scheme.

Parking is immediately in front of the shop.

The Family Manual and Servant’s Guide (1835) & The Practical Housewife (1857) suggest mixing the suspect flour with ‘vitriol’ and if it is contaminated with flour or whiting an ‘effervescence’ will occur.

Oil of vitriol is more commonly known as sulphuric acid – maybe not such a good idea!

We could use another, safer acid instead – Farley (1783) suggests using lemon juice or vinegar.

Elizabeth Hammond (1819) says:
‘To find whether chalk is mixed with bread.
Mix it with some strong vinegar, and if this throws it into fermentation, you may be certain that either chalk or whiting is put in the bread, which is often done by bakers in a shameful degree, especially in and about London.’

Buying butter from Higglers or Carriers
‘Take not the taste they give you, but taste it yourself…….when salt butter is rank and decay’d they work it up with water, and make fresh butter.’

Eggs
‘Hold them against the sun; and if the white appears of a muddy or cloudy colour, and the yolk lies not round, or is broken in any, then they are naught’

Cheese
‘Beware of weavels, little worms, or mites in it; If it be over moist and spongy, tis subject to maggots‘
The Family Magazine 1741 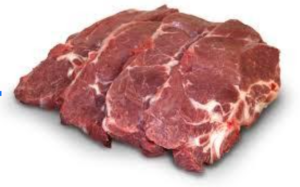 Restoring Tainted Meat
‘Pour a few drops of hydrochloric acid in water till a slightly sour taste, (I’ll let you taste it!)
and immerse the tainted meat in it for an hour, or so, and it will become quite sweet again’

Your meat is now ready for the bbq!