Last month’s article about Block gingerbread (gingerbread using wooden moulds) mentioned that it was once on sale all over Britain. It is interesting to note that it was also exported in ‘large quantities of the best sort’ to India (The Complete Biscuit and Gingerbread Baker’s Assistant by George Read, 1854), so ginger was shipped from India, then back again as gingerbread – not so much a case of food air miles as food sail miles! 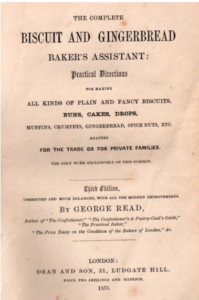 George Read also explained how gingerbread ‘fairings’ (treats purchased at fairs), were still very popular with children, who would ‘spend their last penny on a gingerbread horse, cock in breeches, or an old man and woman’. Fifty years earlier, when living just outside Horsham, a young Percy Bysshe Shelley had requested a similar treat from an aunt who lives in the town as he wanted to take the gingerbread on a picnic. 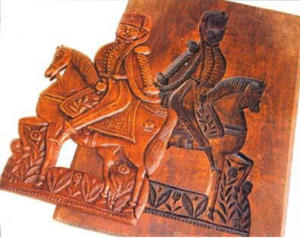 The gingerbread figure shown above is an example of a German gingerbread fairing and is very similar to the ones that were produced in the UK.

Block gingerbread was made with dark treacle and printed with a variety of different designs. 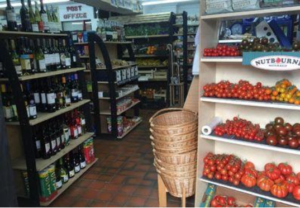 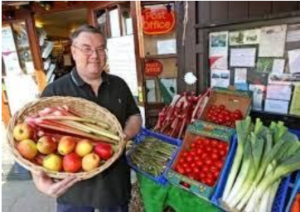 Amberley is one of the most picturesque villages in West Sussex, situated on the Wey-South path and less than half a mile from the South Downs Way. 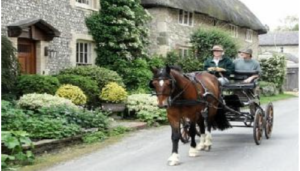 It is a lovely place to visit for the day –  there is a pub, a tearoom and Amberley Village Stores and Post Office, which is in the heart of Amberley, serving the local community and the many walkers, cyclists and visitors to this beautiful area. 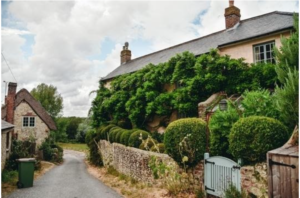 The village is a delight to walk around – it has an ancient church and so many gorgeous old cottages, houses and old-fashioned gardens. There is also a castle which is a hotel.

The twelfth-century church has medieval wall paintings and overlooks the wetland nature reserve.

If you visit Amberley do pop into the very friendly, award winning village stores – they stock lots of delicious local products. It really is the very heart of the village! 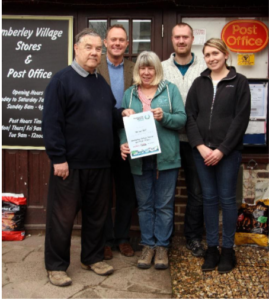 They also have an award-winning delivery service available to the local area.

Have you ever heard of a drink called Salop, Salep or Saloop?

It was a hot drink that was popular in England in the 17th& 18th centuries, and the first half of the 19th century. 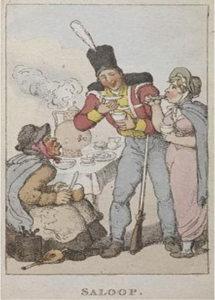 This refreshing beverage was sold in place of tea and coffee, which were much more expensive, and was served in a similar way with milk and sugar. Its popularity declined when it was reputed as a good remedy for venereal disease and so drinking it in public became shameful. 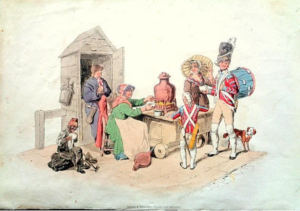 ‘To make Salop; Put a Teaspoonful of Salop to a Pint of Water, with 3 or 4 Blades of Mace, & some Lemmon Peel cut very thin. Boyl it, & Mill it as you do Chocolate, Sweeten it to your taste; add some grated Nutmeg, & juice of Lemon to make it Palatable.’

Lesley’s recipe for Saloop – to recreate the flavour & texture with easily available ingredients
In saucepan: blend together 2 tablespoons rice flour + milk (1 pint)
Bring to a simmer, mixing all the time.
When thick add 4 tsp + sugar + ¼ tsp rosewater.
Cinnamon/ nutmeg over the top.

Maybe we could start a new fashion in hot drinks?